I've been contemplating it for a while now, and decided to go ahead and add to my little "family": my cat, Elf, is getting a little baby brudder or sister today.

A friend of mine has a cat that had kittens, so I'm "babysitting" the two of them that haven't been spoken for today; the idea is to get some idea of which one will best fit in with me and Elf. Needless to say, Elf is considerably less than impressed with the idea -- she spent the first half hour staring at them while growling and hissing at them. Following that, she went off to sulk for a while.

The kittens are both gray longhairs; one has while front feet that the other doesn't. Both have a few random white splotches. One is female (named "Sally Forth"), the other is male ("Marco Polo").

It's been a couple of hours since I opened the carrier they were in, and both of them have pretty much gotten used to being in a new environment, and are actively investigating my apartment. As soon as I can, I'll get pictures of both to put up here.

UPDATE:
As promised, here's a photo showing the two fuzzballs... 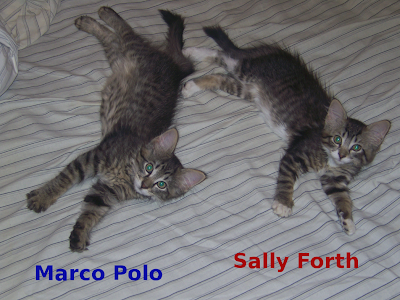 I love your fuzzballs! They're so adorable!