As mentioned in my last post, I've opted to take in a new co-owner. After spending the day with them, I finally settled on taking the cat formerly known as Sally Forth (the one with the white paws, a female). Here's a picture taken yesterday; in it you can see (click to make bigger) why I'm thinking about renaming her to "Radar" (because of the huge satellite dishes on her head), or possibly (because of the dark smudges around her nostrils) "Booger": 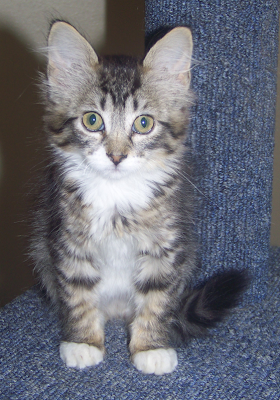 Of course there was a certain amount of displeasure from my current owner, Elf, expressed as growling and hissing at the interloper; and a refusal to even share the same room in my apartment with the little beast.

Happily, that has (mostly) passed by now. Elf isn't ready to become buddy-buddy with the new family member, but has at least gotten to the point that the complaints are mild and infrequent (usually when the nuisance gets too close). Here she is watching the newcomer beating the crap out of a ball in the kitchen: 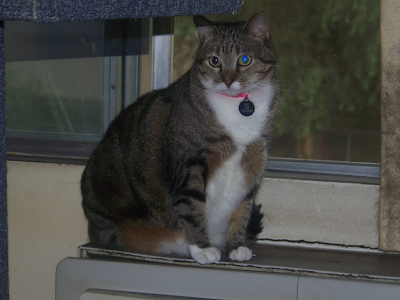 I expect that once the two of them get used to each other, they'll get along fine, and keep each other company.

In the mean time, I've had a couple each of toes and fingers tested to see if they were edible (they weren't), had assorted body parts attackled while in bed, had my feet and ankles ambushed repeatedly, and (of course) been slept on.
Posted by Dave at 09:01