Almost forgotted to mention that I got my workbench finished, too. Granted, it isn't big and pretty, but for roughly $25 in assorted parts and materials, it does the job: 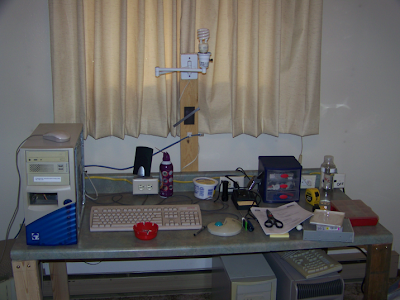 The machine on the left is one that I was working on -- assembly, install the OS, configuration, and such. Underneath the bench, you can (sort-of) see another couple of computers. The one on the left needs a new AMD Athlon CPU. The one right under the scissors is a second-generation Proliant ML370 server box. When it's fired up, it sounds like a jumbo jet, which is why it's holding the floor down at present; something else I plan to do One Of These Days™ is get my utility closet set up to hold my various servers (I can remotely admin them over the network) -- right now, they all live in my bedroom :-( Kind of hiding behind the left bench leg is an old Mac G3 All-in-One that I need to get Mac OS9 installed on (the machine is old enough that it can't handle OSX). I have it just because it's one box that has everything in it: monitor, sound (including speakers), the processor, and so on, for me to 'play' with.
Most of the rest of my online hardware is on a table next to the workbench: 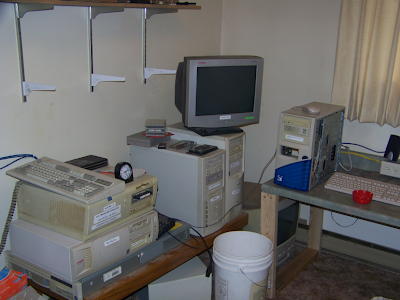 What you're seeing there is 3 file servers (the two towers and the bottom one of the two desktop boxes). The top desktop machine is my webserver. Don't know if you can read the labels, but silly me, I put IP addresses and machine names on all my hardware -- and give them hostnames that actually mean something. You've also got a better view of that Mac All-In-One (which will have a hostname on the network of "wormy" :-P ) That bottom machine on the left is an HP Netserver LPr; though not as bad as the ML370, it's still a little noisy, too. Again, when I get my machines moved, I'll likely move my webserver and firewalling over to it. What you can't see is that I've got a 4-port KVM switch that lets me use just one monitor, keyboard, and mouse with all the servers; each server is clearly labeled as to what KVM port it's connected to :-)
You can also see that I've been getting some shelving installed to hold some of the stuff that I want to keep handy -- spare drives, cables, and so on.
What you also can't see are that the workbench has been wired to allow me to do some different kinds of networking: RS-422, 1-Wire (actually a misnomer), RS-485/488, and some others; or the various bits of test equipment I have (digital multimeter, signal generator, and the like). One of my upcoming projects is to make it easier on myself to fabricate my own PCBs, from schematics and board layouts created with the Eagle system. I have mentioned that I'm (mostly) a hardware geek, right?
Anyway, this should give you some idea of what's been keeping me busy these last couple of weeks, and what kind of mischief I get into to keep myself amused...
Posted by Dave at 14:34