Life with the Beast of Billings

To give you some idea of what it's like having my cat, Elf, around, here's something I went through just a couple of minutes ago...

It's a kind of cold and yucky day (we've had intermittent sprinkles and snow showers; the weather guessers are claiming we may get up to an inch of snow by tomorrow), so I went into the kitchen to make myself a nice cup of hot tea. After getting a teabag out of the cabinet, I turned around to find something very much like this: 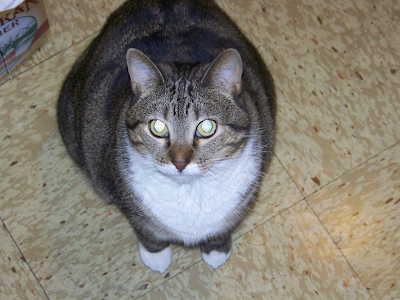 "You're gonna feed me, right?"

Since she's fed in the kitchen (a bowl of dry food all the time, and wet food every couple of days), she's of the opinion that if I go into the kitchen for anything, it must be for the express purpose of feeding her - regardless of how much food is still in either of her dishes.

Anyway, when I simply stepped around her so that I could go about heating water and all that, she finally realized that food wasn't going to be immediately forthcoming, she took up station in front of the door to a small utility closet (water heater, shelves, hooks, etc): 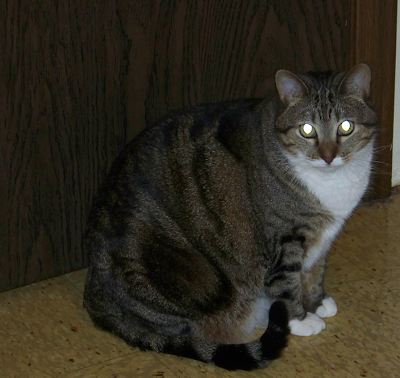 The thing about that door is that it's also where she sits when I'm doing something 'long-term': doing dishes, cooking, and such. If you look closely, you can see that there's a gap between the bottom of the door and the floor. When she's waiting for my attention again, Elf will park herself right next to the door; when she does, her tail generally slips under the door and curls around so that the tip sticks out from underneath - in front of her. Apparently believing that she has a new toy to play with, she'll try to catch it. Since she doesn't have an overabundance of brains, that isn't always successful, and her new toy escapes from her - causing her to get a trifle upset. As her impatience with being unable to catch her tail/toy grows, so does the speed and frequency with which it appears and disappears, only making the task of catching it that much harder...

Anyway, when I was done in the kitchen, I came in and sat down in the living room; a couple of minutes later, Elf turned up - electing to crouch down and stare at me for not demonstrating adequate subservience: 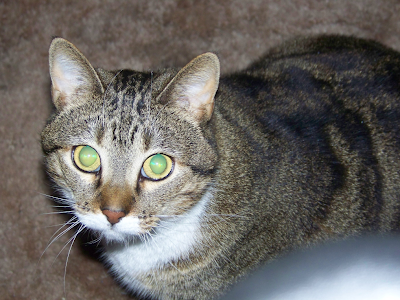 Labels: aminals, humour, It is to Laugh