Why they keep me out of hospitals 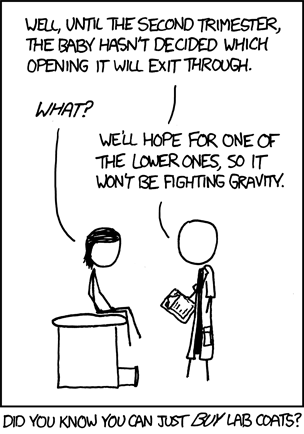 Labels: humour, It is to Laugh

I almost posted this one as well. I used to wear a lab coat just for a very light jacket, and people would approach me at random asking "what about this rash?" "Is this a wart or a boil?" "My tooth is killing me".
I started giving equally random answers..."Put peanut butter all over it." "It's an alien digging its way out." "It's not your tooth, it's the secret radio transmitter inside."
I had to quit when I realized people could FIND me later if I ever wanted to go the same mall/store/whatever.
*sigh* It was fun.

I actually worked I.T. in a hospital for a while, and they wouldn't LET "civilians" wear lab coats.

With my sense of humor, it's probably just as well...