I've gone ahead and gotten one of the little $15 Tonka toys (that I previously mentioned) with the thought of using an Arduino-based controller as the 'smarts' for experimenting with robotics. What I ended up getting was the skid-steer 'Bobcat' front-end loader (that's a 6" steel ruler right in front of the tread, to give you some idea of size): 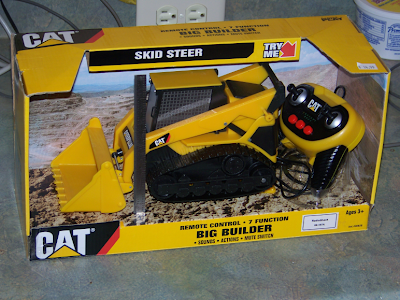 There were other variants I could have gotten (a dump truck, bulldozer, and a different design of front-end loader), the others all ran at what I considered to be a little fast for what I want to do. You can see that the thing is remotely-operated from the little handset on the right; the three buttons result in the thing making 3 different noises: (L-R) a spoken "Caterpillar!", generic rock music, and air horn. The left joystick is forward/reverse, while the right joystick raises/lowers the bucket.
I've already disassembled the thing, and gotten it into a form that I can build on -- removal of the hand controller and some of the extraneous (for my purposes) bits, and added some mounting posts for the circuitry I'll be building: 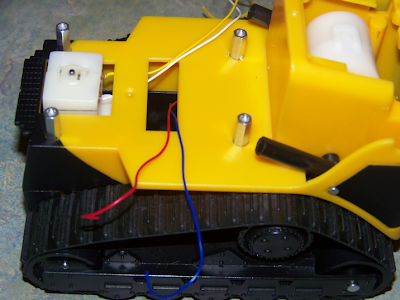 I've basically pulled the 'cab' and bucket (saving both with the idea of possibly using them later), leaving all the innards available. The yellow and white wires are to the drive motor, and the red and blue pair are for the bucket motor (yes, I've left it in, though I dont plan to use it right away -- later, maybe). There's plenty of space between the motors (underneath the top cover) that I'll likely end up filling with more Stuff :-)
I'm not expecting to do anything dramatic with this lashup; this is just the basis for a learn-by-doing period so I can get the basics down.
Posted by Dave at 14:45

I want a tank for Christmas. A real one.